World Design Event
Share on
At the Embassy of Food you can experience something you can’t see: microbes. Microbes are everywhere and influence our lives to a far greater extent than we thought until recently. Our gut flora and what you eat not only influence our physical health, but also our emotional well-being, our behaviour and even our taste. Will we soon be treating Alzheimer’s and depression with diets? And what can designers do with such knowledge?

‘This year, the Embassy of Food is focusing on the invisible components in our food,’ says eating designer and programme curator Marije Vogelzang. ‘Which is why I want to call the Embassy the Micro Embassy, also to indicate that this year the Embassy is quite a bit smaller than last year. The programme is definitely not less interesting, though. We focus on food and design in relation to micro-organisms. We investigate wat designers can do with all the knowledge about the role of micro-organisms in our digestive tract, in the soil and for agriculture. We increasingly realize, for instance, the importance of bacteria and fungi in the soil for our lives and that it therefore can be important to grow your own food. We will offer visitors to the embassy a wide range of ways to experience the role micro-organisms play in our lives.’

Every individual human being carries around some two kilos of bacteria, without which you would not be able to survive. Nevertheless, we’re taught from a very young age to combat bacteria. You’re told to wash your hands to stop these wonderous, invisible pathogens from harming you. In the west in particular, bacteria are primarily associated with disease and we battle against them using chloride, disinfectants and pasteurisation.

We’re only slowly beginning to understand that there are also many good bacteria. There have been many new scientific insights from the field of microbiology in recent years. Gut bacteria in particular are attracting attention. Now that evidence is mounting showing that your microbiome (the bacteria in your intestines) not only influences your physical health but also your emotional well-being and your behaviour, a completely new world has opened up. It raises the question: Are we actually being ruled by the bacteria we carry within us? And what can designers do with all this?

New knowledge has led to an increased application of faecal transplants in the medical world. For example, replacing an obese patient’s gut flora with someone else’s gut bacteria can help the patient lose a huge amount of weight. Researchers are now studying whether this could help patients with depression too. So, as we begin to understand that the world of gut bacteria is much more complex and has a far greater influence than we previously thought, we are also starting to look differently at food.

We focus on food and design in relation to micro-organisms. We investigate wat designers can do with all the knowledge about the role of micro-organisms in our digestive tract, in the soil and for agriculture - Marije Vogelzang, Curator Embassy of Food

Designers in particular can help us develop this new way of looking at bacteria and food. Designers find ways of enabling us to experience what those invisible, intangible microbes do and what their significance is for life. The EDIBLE INVISIBLE exhibition at the Embassy of Food offers designers an opportunity to do precisely that. EDIBLE INVISIBLE is about our society and our culture, about how we relate to hygiene and about the future of food. What will we do now that we know about this micro-world? Will we inject probiotics into all our food? Will we design diets for our gut bacteria instead of for ourselves? Can we influence the flavour of food by adding certain bacteria during the growing process? What can industry do with these insights? 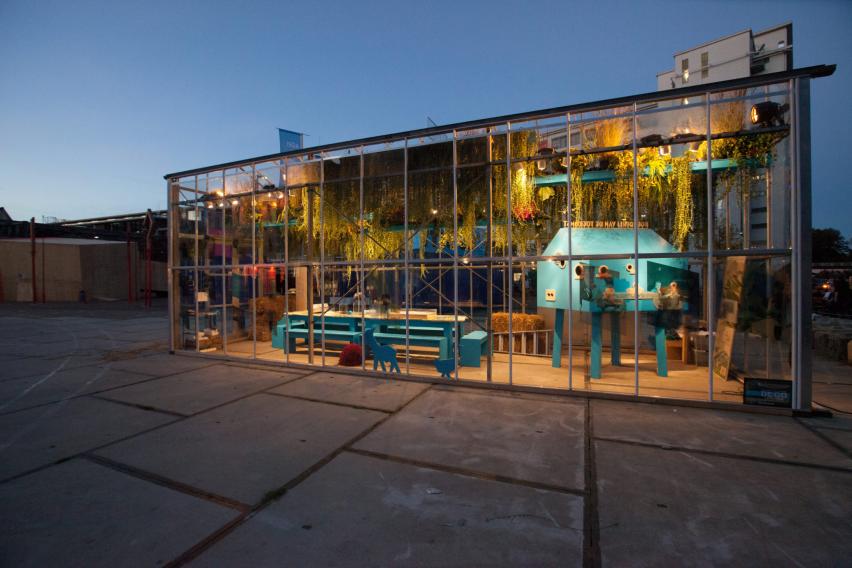 ‘The exhibition focuses on these types of questions and how designers might be able to make the scientific study of these questions tangible,’ says Vogelzang. ‘The exhibition is divided into two sections. One section will be provided by students at the Food Non Food department of the Design Academy. Under the supervision of Tom Loois and Mara Skujeniece they will put together an interactive experience which will give visitors a sensory experience of how microbes affect us.

‘The other section of the exhibition consists of at least six projects by designers who work with food. For example, German students will present an installation in which people can grow algae by feeding them with bacteria from their breath and saliva. Another project uses chocolate as a wrapper for various bacteria. In this concept people are initially sent a bonbon containing a nanorobot which analyses the bacteria in their gut. Based on the results they are then sent chocolates containing bacteria that will improve their gut flora. Visitors will also be able to listen to music produced by fermenting sourdough.’

Alongside EDIBLE INVISIBLE the finalists of the Future Food Design Awards will also be on display at the Embassy of Food. This is the second year the award will be presented. The prize was established by The Dutch Institute of Food & Design (DIFD) in collaboration with Agri Meets Design. During the DDW the public can vote for the audience award. The awards will be presented on 26 October during the Future Food Design Awards Show, during which all the finalists will elaborate on their projects.

During the DDW, the DIFD will also organise an afternoon of lectures and discussions about the Future of Food & Design as well as a series of live interviews with designers.

Like to know more about our World Design Embassies?