Message in a Bottle is the fifth unique Perceptive Object, and furthers my vision of creating novel, multi-sensory modes of communication. The project will allow visitors to the Dutch Design Week to experience live sounds from around Lahore (Pakistan) through an interactive audio-visual illusion.

Three translucent glass bottles with wooden bases are placed on a wooden plank. Each bottle has a cork in the opening on top. Gently changing light can be seen inside each bottle. When any of the corks is removed, the light inside that bottle disappears, and live sounds from a place in Lahore are heard for a few seconds, before gently fading out into silence. The decibel levels of the sound heard will be directly proportional to the intensity of the light at the moment the cork was removed, creating the illusion of the light turning into sound. Once the cork is placed back in, the light starts filling the bottle up again. The same happens with all three bottles, but with unique sounds from different places playing each time.

I aim to create an experience that visitors remember for its own inherent novelty, but also for the sounds of another city inside those unassuming bottles - like a modern message in a bottle. I also want to encourage them to think more deeply about how our interactions with technology don’t have to be restricted to pointing, swiping and pinching our fingers on the cold glass surfaces that surround us; but be creative and playful, and engage all our senses.

Collecting the Audio:Three mics are placed in busy public spaces in different parts of Lahore, Pakistan. Ambient sounds picked up by each mic are sent to one of the flasks on display in Eindhoven, Netherlands.

Audio to Visual:Inside the base of each flask is a Raspberry Pi that receives the audio. An LED strip attached to each Pi reacts to the incoming sound, illuminating the LEDs in direct proportion to the decibel levels of the audio received. This means that the louder each mic’s surroundings in Lahore, the brighter the lights inside the corresponding flask in Eindhoven.

Playing the Audio:While the light’s intensity fluctuates in reaction to the incoming audio, the viewer cannot hear anything while the flask is still closed. When they open the flask by removing its cork, the light turns off and a 4-5 second clip of the incoming audio is played through speakers hidden in the flask’s base. The goal is to have the viewer feel like the light has been ‘released’, turning into the audio clip in the process. 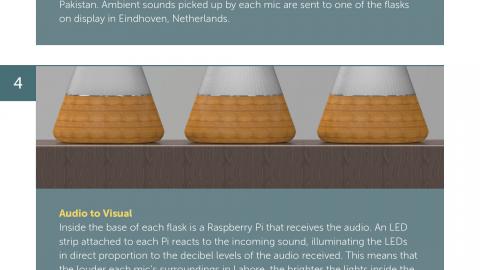