Hot, dry summers, intense rainfall and a rising demand for clean drinking water caused by a growing population. The quality of the water supply in our water-rich country is coming under increasing pressure. The Embassy of Water points out the challenges and displays some innovative solutions that are being conceived to meet them.

Ideas for a water-friendly city

A Purification Greenhouse, rainwater beer and a Turritap that makes tap water naturally whirl to make it even more tasty. These are some of the innovations visitors will encounter at the Embassy of Water in AtelierNL’s church on Bergmannstraat. The Embassy of Water is a platform for water related innovation where people can share knowledge, inspire each other and jointly accelerate meaningful innovations.

Given their broad, groundbreaking outlook and their infectiously positive attitude, designers have a major part to play in tackling the increasingly urgent social issues surrounding climate change and increasing urbanisation.

‘During the DDW at the Embassy of Water, local authorities and knowledge institutes will point out the major issues and where opportunities lie for improvement and innovation,’ says Anouk van der Poll, owner of vanderPolloffice and curator of the Embassy of Water. ‘Designers will use the Embassy of Water to display their ideas, products and systems which can serve as potential directions for solutions. This enables an interplay to emerge, a ‘creative interference’ which ensures that ideas, talents and expertise can amplify one another. Let’s galvanise, inspire and activate each other.’

"During the DDW at the Embassy of Water, local authorities and knowledge institutes will point out the major issues and where opportunities lie for improvement and innovation." Anouk van der Poll, owner of vanderPolloffice and curator of the Embassy of Water

The Embassy of Water programme focuses on two themes: Water-Sensitive Urban Design (Water in the city) and Nature-Based Solutions (the value and power of water itself).

Due to rising numbers of people living in cities and the expansion of cities themselves, the way water is managed in cities is becoming an increasingly urgent issue. Which is why the Embassy of Water is focusing primarily on water in the city during the DDW. The central question will be: How can we turn Eindhoven into a water-sensitive city, ready to meet the challenges posed by increasing urbanisation and climate change?

‘This question is a result of the system for urban water management known as Water Sensitive Urban Design,’ says Van der Poll. ‘This approach is seen around the globe as an extremely effective solution for tackling the problems surrounding urbanisation and climate change such as rainwater problems and urban heat islands, those locations in a city which heat up excessively because of too much concrete and a lack of green.’

This approach aims to reduce water usage, to catch, purify and recycle rainwater and to construct sustainable drainage systems. In a water-sensitive city, rainwater is no longer directed straight into the sewers. Instead it is captured and diverted through green roofs, water squares, rainwater gates and ponds. This fits well with green urban and infrastructure agendas which aim to make cities more sustainable and liveable.

As part of the DDW, the Eindhoven municipality, the De Dommel water authority and various designers and design agencies will display specific ongoing projects aimed at making Eindhoven a water-sensitive city. They will also indicate what challenges remain and where further improvements are possible.

During the DDW several of Ontwerplab’s projects will be on display. Ontwerplab is a partnership between the municipality, Eindhoven Technical University and the De Dommel water authority focusing on climate-proof design of the living environment.

Fien Dekker uses her remarkable tiles to harness rainwater as a quality for a pleasant and healthy living environment. Her new series of tiles entitled ‘Wave’ enables you to create an infinite variety of patterns ranging from open to closed surfaces. The tiles will be on display in a model garden on the patio at the Embassy of Water.

As ‘Strategic Creativity’ research associate at the Design Academy, Studio 1:1’s Lucas Zoutendijk was commissioned by the De Dommel water authority to make an inventory of the water authority’s waste flows.

The second focus during the DDW will be on water itself, its beauty and power and what we can extract from that. Van der Poll: ‘Nature-Based Solutions are ideas and solutions inspired by nature, also known as biomimicry. This is where we look at what nature can teach us about managing the problems that accompany climate change. This raises questions such as: What is water precisely? How can we make better use of water? How can we find solutions to contemporary water problems by examining how water naturally behaves?’ As part of the DDW, the De Dommel water authority will display the following two new water projects:

The FishFlowForm is a project in which a natural, lemniscate-shaped flow of water is used as a fishway. Can we apply this principle in cities too?

A Purification Greenhouse has been installed at Koningshoeven Abbey, where food production is combined with water purification. It is conceivable that this principle can be implemented in cities too, for example for local neighbourhood water purification.

The essence of water

Distributed around the church, a side exhibition entitled ‘The Essence of Water’ will display all sorts of surprising attributes of water. It focuses in things like vital water, water as information carrier, the structure of water, the fourth phase of water, vortices, water sound images, water’s self-purifying properties and water memory. The exhibition raises awareness about the significance of water by enabling visitors to experience, taste and test water.

Visitors will be able to taste Joris Hoebe’s Rainbeer, brewed with rainwater, or drink a cup of mint tea made with water from Peter Scheer’s SEMiLLA Sanitation Hub. This waste water purification installation uses advanced space technology to transform sanitary waste water into clean water and nutrients for food production.

Visitors also can tell if they can notice any difference between tap water and water that flows through a Turritap. The Turritap is an ingenious spout designed by Cees Kamp that vitalises water. By mimicking the natural swirl of water in mountain streams, tap water becomes surprisingly tasty water, soft, fresh and sparkling as mountain water. Come and taste it. 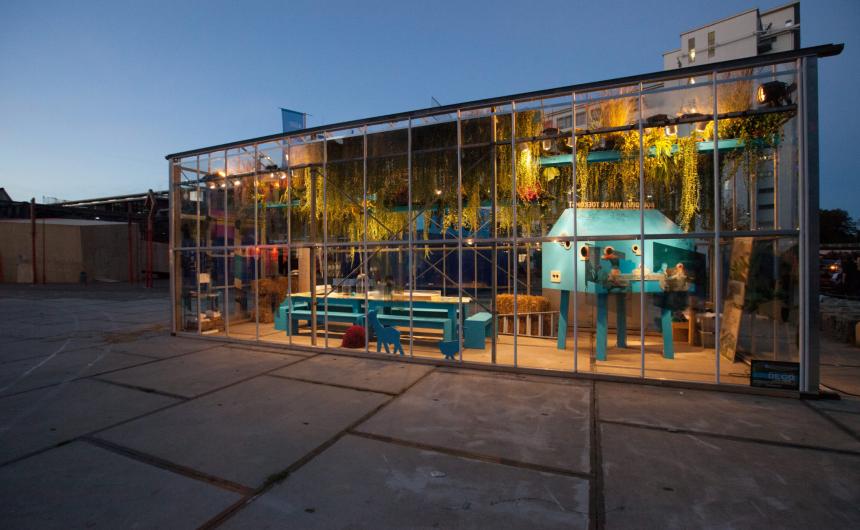 Did you also check our other Design Embassies?