Esseline designs circular LightScapes that she makes bigger and bigger over time, think of blowing bubbles. The production of her designs relies on additive manufacturing techniques using 3D printers, which limited scape size at a certain moment. Then, she tried using large 3D robot printers offering much more production space. The body of her Lightscapes is as a natural birth, caused by ‘popping’ of a hybrid material from internal force fields. Organic shapes of heated thermoplastic filaments are printed onto a fabric. After cooling, a new hybrid material with a high potential mechanical energy has born. When releasing the fabric, forces inside the plastic shapes increase, causing the whole shape to pop into a unique form field. Energy is used for the genesis of unpredictable forms, the LightScapes.

The LightScapes are surprise creations, fully finished as a lighting product. Initially, Esseline will focus onto the consumer market. As scape sizes grow, new markets may open such as art, design, fashion and decorations in public spaces like festivals, theaters and town halls. If sizes reach to gigantic, light tunnels may be build where people walk through and experience a completely new organic environment. Sound and music may be added for a complete audio-visual transformation experience.

Esseline has graduated in 2006 from the Design Academy Eindhoven. From 2007-2017 she was an independent self-employed designer, specialized in graphical design, illustrations and completed various assignments. She followed the FabLab summer academy of the Waag Society in Amsterdam from 2016 onwards, and there she created here first lamp together with other designers. She continued working in lighting creations and started Esseline Design (www.essje.com) to promote the Formidable Lamp concept.

,,My goal is to produce large LightScapes, starting with selling the Formidable Lamp. To reach this goal, I need to organize different partners that make-up the whole production chain.'' Most important is the choice of materials and the cohesion technique between them to make the new hybrid material. For the 3D printing process, I recently contacted HB|3D in Haarlem and just made some fist production attempts which appeared to be very successful. Even, I was able to use recycled plastic that was collected from the Amsterdam canals which behaved very well in conjunction to various elastic fabrics. 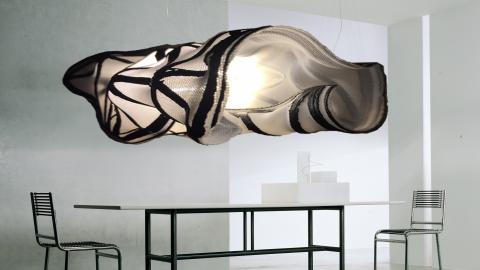 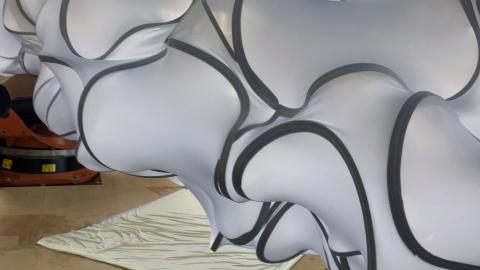