In ‘87 I went to New York for a graphic design internship and ended up staying in the US. It took a good five years to feel mostly at home. This is normal, from what I’ve since learned from other immigrants.

I was very lucky to stumble into a design position, at The MIT Press, a university publisher in Boston. A place full of slightly off-kilter people, who welcomed me with open arms. Books became my home.

Years later, I discovered the coast of Maine. It does not look like Zeeland--at all. But it smells like it. The sounds are similar. And there is that low horizon; textures and creatures; and lots of gray-blue.

Transported back to a time before any art-education, when I made things ‘just because’,  I began experimenting with fiber in response to the landscape. The overlapping of the two coastal experiences, past and present, somehow clarify and intensify its impressions.

One small section of mid-Coast Maine in particular, called Flye Point, has the strongest pull. It feels timeless and remote. While there, the sense of both cultures merge somehow.

I place the experiments, objects and wearables I make into this landscape, and notice that while they are alien there, they are also perfectly at home.

The immigrant experience is one of much newness and filling in blanks. It is also one of continuously redefining what you already knew. I believe this knowledge enriches not just the immigrant but also those around them. 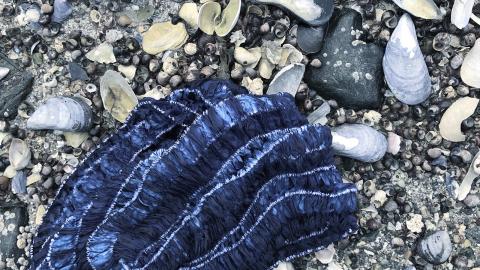 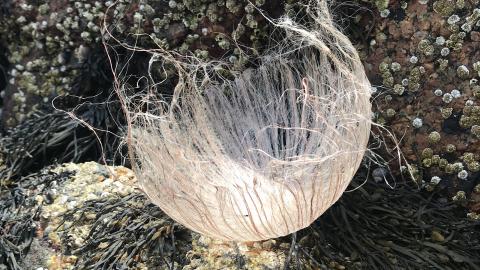