Key-design to the next generation rail infrastructure. Recently, I have developed a very future-proof railway turnout, the WIRAS. The turnout is supersilent, and both the points and frog are winterproof without a point heating system. That saves a lot of heating energy, money and CO2-emission in winter.

The WIRAS turnout is an entirely new design railway turnout. The WIRAS turnout will function in winter conditions without a railway turnout point heater. No high energy bills and no CO2 emission anymore. Because of much troubles and problems every winter with turnouts and turnout-heaters of the Dutch Railways (Nederlandse Spoorwegen) which causes many train-traffic delays, we have developed a new mechanical working principal (a new design) for railway-turnouts during the last 9 years. This new design turnout is not fitted with horizontal movable tongues, and because of that, snow and ice have no impact on the correct working of the turnout ! and because of that it needs NO turnout heating system at all ! The problem with horizontal movable tongues (a design of more than 100 years old) is that snow and ice can be falling in between the tongue and the stock-rail. For that you need an expensive and reliable high power turnout-heating (10kW - 15kW) for every turnout which must stay switched-on for two or three months every winter. That will result in high energy- and maintenance bills.

Instead of open horizontal movable tongues, the WIRAS turnout is fitted with vertical movable tongues which can bend and slide up and down between guides along each tongue. Snow and ice have no chance to fall in or creep in between mechanical parts of the turnout. The vertical movable tongues are driven by a set of hydraulic short stroke cylinders, and are locked in position by mechanical horizontal moving locking bars. The rail-tongues (points) and the locking-bars can be driven electro-mechanically or electro-hydraulically. The WIRAS turnout will function in winter conditions without a railway turnout point heater. That means : No more train traffic delays in winter because of snow and ice disturbing correct functioning of railway turnouts. That saves much money. No high energy bills and no CO2 emission anymore for the high energy consuming point heating systems which must stay working long time in winter periods. (15kW per turnout in some cases) Also disfunctioning heating systems are history now because there are no heating systems needed anymore ! Further there is no need for manufacturing, buying, installing, inspecting, maintaining, repairing and monitoring of heating systems because there are no heating systems needed anymore ! The WIRAS turnout can replace conventional turnouts which are fitted with a heating system. At this moment the WIRAS turnout is discussed in The Netherlands with turnout manufacturers : Vossloh Cogifer and Voest Alpine , The Dutch Railways NS and ProRail (the Dutch rail-infrastructure adminstrator) The WIRAS turnout is patented and is applicable for both train and tram rail-infrastructure.

Below a calculation example of the savings which can be achieved with the WIRAS turnout on one year basis (Deutsche Bahn DB) : Electric Power one point heater : 10kW Amount of heated railway turnouts in Germany : 22567 Average time in 2012 when pointheaters were switched on in Germany : 1440 hours Price for one kWh : Euro 0,07 For producing one kWh 0,7 kg CO2 is emitted. When the WIRAS Turnout will be applied in the DB Netz :

• Further huge saving can be made because DB Netz does not need to purchase, install, inspect, monitor, replace, and repair expensive point heaters anymore.

• But the most important : There are no train traffic delays anymore because of malfunctioning turnouts in winter. The WIRAS turnout will function 100% in winter conditions !

• Serial production of the WIRAS winterproof railway turnout is not more expensive than conventional turnouts as we use today. It has a very simple mechanical setup.

One full-functional 1 to 6th stainless steel scale-model of the WIRAS Winterproof Turnout and its Winterproof Movable Frog is build as a demonstrator for everyone who want to see the whole design work in real during displaying and demonstrating at indoor meetings, exhibitions and technical presentations. These scale-models are a high detailed representation of the real scale WIRAS winterproof turnout and movable frog and can be easily transported because its weight is only 90kg and its dimensions are 1300mm x 900mm. These WIRAS scale models are both full digital and are programmed and controlled by an intern digital controller, and have high power digital servo’s as actuators.

The S-CODE (Switch and Crossing Optimal Design and Evaluation) project is an R&D project in which companies, universities and other organisations are brought together derived from four European countries. The S-CODE project is funded by the European Commission, under the Horizon 2020 programme, specifically as part of the “Open Calls” related to the Shift2Rail joint undertaking. The WIRAS – Winterproof Railway Turnout is mentioned as Concept B in the S-Code results-presentation as published on the S-CODE website www.s-code.info and is ranked as number 2 out of a total of 22 researched and evaluated concepts.The joint Shift2Rail initiative is a public-private partnership (PPP) and provides a new platform for innovation and development in the rail sector for the near future. Research will be carried out within this platform, with contributing significantly to solving the challenges facing the rail-sector as main-target.The initiative proposes a new coordinated approach involving the rail sector as a whole and its users. The main-target of the S-CODE project is the research, development and validation of new, disruptive and radical concepts for the mechanical design of rail devices which will increase capacity, reliability and safety, while simultaneously reducing in operational costs. The S-CODE project will further identify, apply and combine new technological innovation-concepts which will allow significant improvements in the performance of rail solutions (by example : winterproof railway switches which do not need point heating, self-repairing rail devices, super-quick acting switches, etc.).The project duration is 36 months and began officially on the 1st November of 2016. The launch event took place on 15th December 2016 in London.The S-CODE project consortium includes the following European companies, universities and organisations: University of Birmingham, Výhybkárna a strojírna a.s., Ferrovial Agroman, Rhomberg-Sersa Rail Group, Rail Safety and Standards Board, COMSA, Loughborough University, Brno University of Technology, and the University of Pardubice. Total budget: € 5 million Project start date: 1 November 2016 Project end date: 31 October 2019 Duration: 36 months Partners: 9

All information about this turnout is presented at our website, including animation Video’s, render-images and technical drawings. 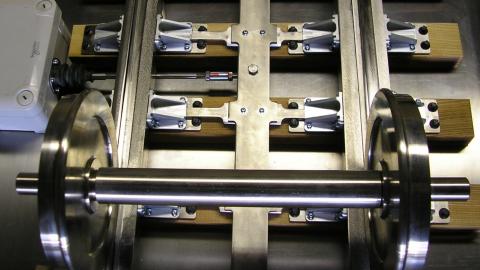 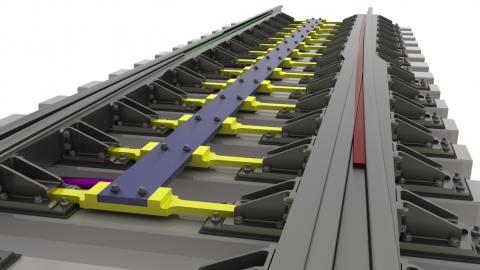