by Alberto Campesato on 24 September 2019

Today, I want to look at the work done through a different lens. Nowadays anthropoid robots question the role of human labor and its contribution into future society. We are used to recall them like bulky pre-industrial devices, they often fake human-like form. With the work presented we draft a future where robotics implements human capabilities with systems closely related to natural organisms.I recall the end 2009 with my master's graduation and the search of job in a broken economy. Yet, an exciting moment. A side project far reaching that started as a project in between job’s hunting and portfolio’s preparation. The study was conducted as a natural development of a software to form-find structural systems matching architectural needs in the slam of Mumbai (thesis in Computational Architecture - Hyperbody: Form-finding as design strategy). Waiting for a reply from architectural and engineering firms, quickly most of my time had been adsorbed by the research’s findings. Soon enough, I had found some motivations farther more exciting than work in a firm or make interviews. That very moment in time brought me later on into several simposyum around the world, few exhibitions, some publications in scientific reviews, and few workshop at EPFL and some other university around europe.  What a wonderful derail. I see that time as exciting as today. Armed with limited resources and unpractical ways to framework a research scope, I started to build up step by step knowledge and skills. First  I dived into software engineering. It took me over a year just to sketch the software core, that still today I am using to model tensegrity systems. Books of sketches and thoughts, hundreds of drafts and models to make it works theoretically and in practice. Finally a multidimensional neural network. An intelligent swarm of information driven toward the only goal to optimize an intended form using tensegrity systems. A distributed artificial intelligence, able to form-find free-form arbitrary systems. After that, my first attempts to collaborate with engineering companies specialized in construction, but the lack of perspective and sensitivity toward future applications of the design software toolbox. Realising the necessity to move on and acquiring manufacturing capabilities -to translate digital models into real functional prototypes- it got me out out of my comfort zone. I guess that was the premises for the experience on prototyping to come. My first step was to enroll to a fablab course aimed to build your own Ultimaker 3D printer. That was the year 2010 in Utrecht, when accessible FDM 3D printers were in its market infancy. It is funny to recall those people that with me opened up to a whole new world. After a few tests and explorations in the vast realm of possibilities with 3D printer, it started for me probably the harder steps. Refining the techniques and where possible improve them. Thinking of manufacturing with an eye to material performance. In 2011, in the same Fablab of Utrecht, I enrolled in a course of CNC machining: the first step towards precision manufacturing, repeatability and material performance reached with molding and casting techniques. At the apex of the learning curve I taught myself what was left: lasercut, mold-casting of plastics and resins. At this point in my research track, semi professional results were obtainable with better material performance. Completely captured in the project, the aim was just re-process and improve results.

I guess, 3D printing definitely had opened me ways into experimentation and confrontation to buildable limits. The possibility to model, produce a prototype and test was the key to explore the applicability of the research. Later implementation of other techniques and development had been widening the research applicability and scope. Just recently I collect part of the research within a submitted patent, this past July. Now it awaits me a path toward industrialization and further field’s applicability. Because progresses come when a new field of science roots their way out to answer problems other  cannot.

The research -summarized in a recent submitted patent- drafts for the first time the results of ten years research across fields of software engineering, design and manufacturing processes. The technology used -based in tensegrity principle- is here employed to give form to an actuated lightweight arm resembling a human arm. Based in an unprecedented application of tensegrity system, fundamental principles of nature display how forces of tension and compression intertwined materializing a minimal structural system. Because their lightweight, flexibility, transportability, minimal use of material and energy, this systems embrace a future of sustainable systems in terms of production cost and environmental compatibility.

What you will see:

At a closer look, the actuated structural system appears as an hollow silicone body barely 1 mm thick, with no internal support: a glove manifesting an intrinsic rigidity. The object is suspended and punctured by multiple motors plugged into its skin. The body shows itself capable to perform complex motions similarly to an anthropomorphic arm. 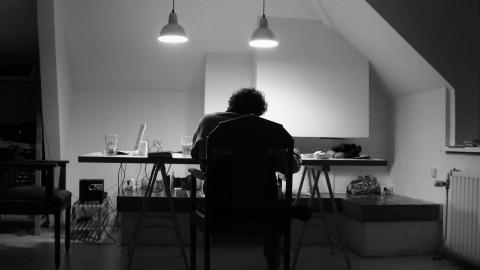